View source
watch 01:36
We're Getting Mutants in the MCU - The Loop
Do you like this video?
Play Sound

Student
Captain of the football team

Chris Hooker is a 17-year-old boy who attended St. Benedict's Catholic School. He was romantically interested in Sarah Bailey, but after she didn't sleep with him on their first date, he spread a lie around school that the two slept together, and it was the lousiest lay he'd ever had. He did the same thing to Nancy Downs in the past, and also gave her an STI. In retaliation, he had a love spell placed over him by Sarah.

He is portrayed by Skeet Ulrich.

Chris was born c. 1980 to two unnamed parents. He attended St. Benedict's Catholic School with Nancy, Bonnie and Rochelle. He mentions that he owned a puppy as a child. Chris was captain of the football team and popular, but was also self-centered, self-absorbed and a bully. He was apparently involved in a relationship with Nancy. He told everyone in school that the two slept together and that she gave him an STI, spreading rumors that she was a slut after the relationship ended.

After Sarah's arrival, Chris attempted to befriend her, due to finding her attractive. He warned her to be wary of the 'Bitches of Eastwick', as he referred to Bonnie, Rochelle and Nancy. He invited Sarah to his football practice and she went to watch him play. Nancy deliberately distracted Chris, causing him to trip. She tried to warn Sarah off Chris, but Sarah refused to listen. Chris went out with Sarah and they kissed, with Chris later suggesting they go back to his house. However, Sarah declined, as she wasn't interested in sleeping with him yet. This angered Chris and in retaliation, Chris spread a rumour that he and Sarah slept together and that she was terrible in bed. He refused to apologise when Sarah confronted him, and just accused her of being pathetic. Later, Sarah puts a love spell on him, causing him to become infatuated with her. He follows her around and does anything she asks, becoming completely devoted to her. However, the spell spiraled beyond her control, with Chris becoming completely obsessed with Sarah and stalking her. He eventually attempted to rape her, but Sarah fought him off and escaped. Later, he attended a party at Trey's and became extremely drunk. After learning what Chris had done, Nancy went to the party seeking revenge. She beckoned Chris to an upstairs bedroom and disguised herself as Sarah by using a glamour. Chris was so drunk, he believed her to be the real Sarah and willingly let 'Sarah' seduce him. The real Sarah interrupts them, whereupon Nancy regains her true form and Chris is clearly terrified and confused, accusing Nancy of being a witch and insulting her. This infuriates Nancy, who says that he treats women like "whores" when he is the real whore. She then kills Chris by telekinetically throwing him out of a window, whilst Sarah looks on in horror. Chris' death is ruled as an accident, though Sarah, who knows the truth, is distraught over it, in spite of Chris' actions. 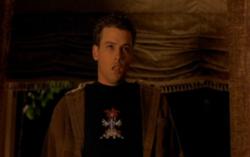 In the film's climax, Nancy creates a fake suicide note from Sarah, in which she 'admits' to killing Chris. However, as Sarah ultimately survives and defeats Nancy, her attempts to frame Sarah for Chris' murder are thwarted.

Chris could be very charming and charismatic, but was also very self-centred, arrogant and immature. He was misogynistic and quite manipulative, only seeming to value girls for sex, and felt no remorse for coercing them into sleeping with him and then casting them off. He becomes angry if can't get his own way and childishly spreads horrible rumours about Nancy and Sarah when they either resist his advances or he tires of them, suggesting he is very entitled and used to getting what he wants. His comments about Bonnie and Rochelle suggest he is also quite judgemental. Under the influence of Sarah's love spell, Chris becomes increasingly obsessive and aggressive, culminating in him trying to rape Sarah. It is unclear if, had he not been bewitched, Chris would ever had attempted anything so violent.

However, Chris did have a softer side, admitting to Sarah that he loved his mother and a puppy he had as a child, which are the only things he ever truly, deeply cared about. He claims to love Sarah and tries desperately to win her approval and affections, though this is due to the love spell she put on him and his feelings are closer to infatuation than genuine love - without the spell, Chris only cared about sleeping with Sarah and had little interest in her as a person.

Community content is available under CC-BY-SA unless otherwise noted.
Advertisement